What do we lose when we lose a waterfall?

When the waters stop flowing, a waterfall’s natural beauty quickly disappears. With it goes unique geological and hydrological systems built up over centuries or millennia, as well as the species that have evolved to thrive in and around the rough-and-tumble waters and rocky formations.

Some of those species have nowhere else to go. When a waterfall vanishes, the plants and wildlife that depend on it can go extinct in the blink of an eye.

That fate appears to have befallen a rare plant in the Republic of Guinea in West Africa. And scientists warn it could be the first of many.

Denise Molmou, a botanist with the UGAN-National Herbarium of Guinea, discovered this plant — which has since been named Saxicolella deniseae after her — in 2018. At the time, it grew in a single known waterfall along the Konkouré River.

That’s not unusual for Saxicolella plants, aquatic herbs that grow on rocks (“Saxicolella” translates to “stone inhabitant”) in the fast-flowing, heavily aerated waters of falls and rapids. Most of the species in this genus have evolved in unique waterfall microclimates and grow in just a handful of locations. Without the right conditions, the plants can’t thrive or reproduce.

Their fragility earned the genus the nickname “orchids of the falls” from naturalist Sir David Attenborough, who showcased them and other rare plants earlier this year in the Green Planet documentary series. (They’re not actually orchids, though; they belong to Podostemaceae, the same taxonomic family as St. John’s wort.)

Attenborough didn’t witness S. deniseae itself for his program, and now it appears no one else will. According to a paper published this May, that waterfall along the Konkouré no longer exists. The entire region was permanently flooded to create a new hydroelectric dam soon after Molmou discovered the plant species. Satellite images from Google Earth reveal a massive reservoir where a river and forest once sat. 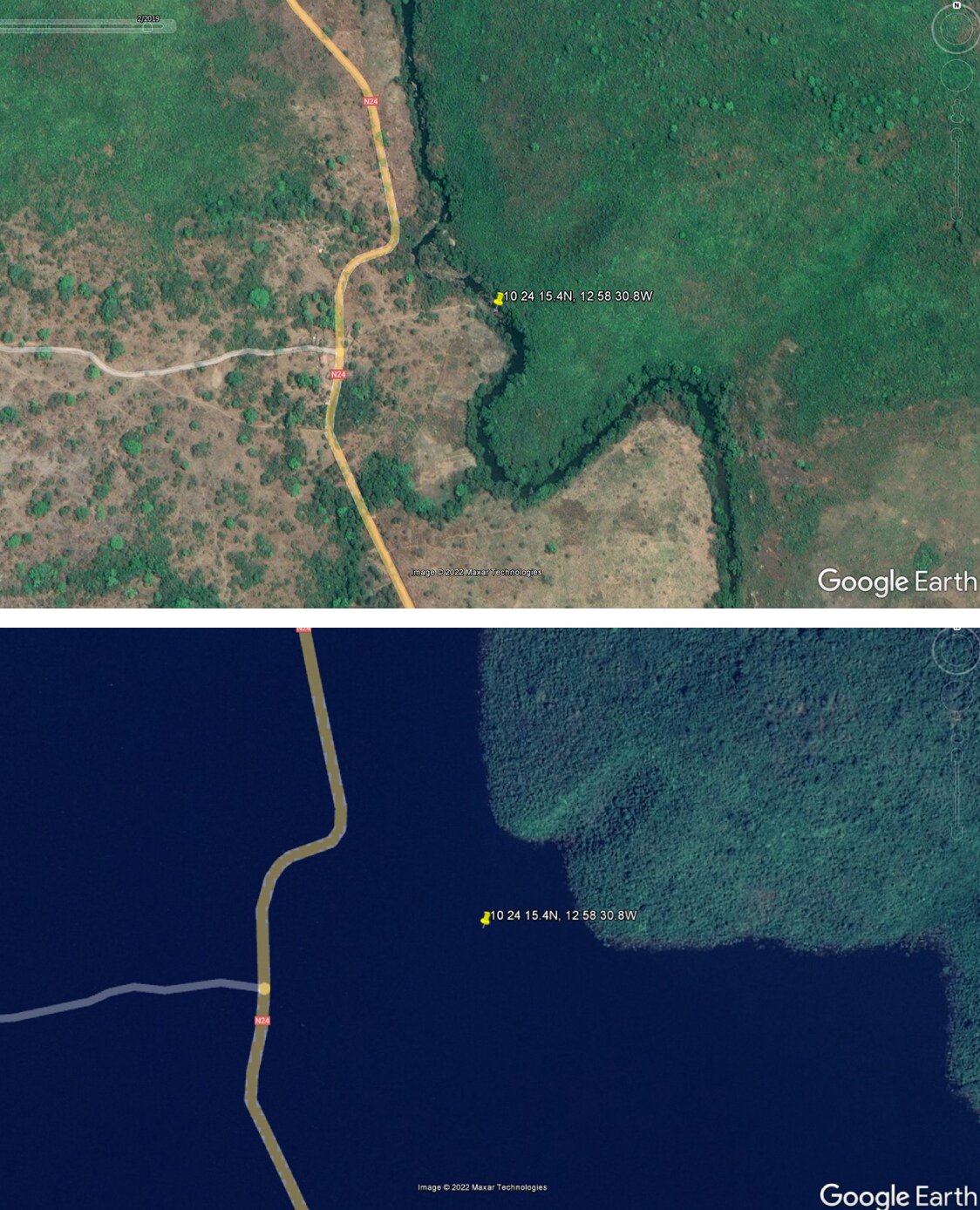 As happens all too often lately, the scientific paper contains both the first published description of S. deniseae as well as the news of its probable extinction.

“While it is a great honor to have a species I discovered in the wild named after me, it is really sad that it is almost certainly extinct,” Molmou said in a prepared release. “I will look to see if we can find it in other waterfalls, even though the chance of finding it alive is not very high.”

The paper describes several other Saxicolella species for the first time and warns that this may not be the last time that dam construction floods these plants into extinction, along with other never-described species. Many additional hydro projects are in various stages of development throughout the region to provide West Africa with much-needed electricity.

That power comes with a cost. As dams block rivers and reservoirs fill behind them, habitats and wildlife disappear. Sadly, S. deniseae isn’t the first this has happened to. Hydroelectric dams are believed to have contributed to the extinction of the baiji (Lipotes vexillifer), a Yangtze River dolphin. In the United States, habitat destruction by dams has also led to the loss of freshwater mussels like the flat pigtoe. Numerous fish and other aquatic species have also been pushed to the brink with the loss of free-flowing rivers.

Now we have a plant, if not many plant species, to add to the list.

“I am in mourning for the other, now eternally unknown species of the Konkouré River, with its falls and rapids now nearly completely under reservoirs after we had only just begun to find out what Podostemaceae species were present there,” says Martin Cheek, the paper’s lead author, who leads efforts to identify and name new African plants for the Royal Botanic Gardens, Kew. “Too late now, so sadly.”

Cheek says the pandemic and Guinea’s 2021 military coup prevented them from returning to the site to collect and store any S. deniseae seeds, which could have been used to preserve its unique genetics or even to propagate the species.

Ironically, the pandemic may have given a few other species a temporary reprieve — although temporary is the operative word.

“The good news about the pandemic was that lots of ‘development’ was suspended,” Cheek says. “However, now projects are moving ahead. And thanks to the energy crisis due to Russia, it looks like ‘renewable energy’ projects like hydropower are going to get a boost. That means in the tropics more rapid extinctions of waterfall species, especially Podostemaceae, even before we know they exist.”

The dams also have a human cost: Residents of more than 100 villages and hamlets were forcibly removed from their ancestral lands to make way for Guinea’s 450 megawatt Souapiti dam, which went online in 2020.

But even as the destruction continues, so do other conservation efforts. And some have made exciting progress.

“We have succeeded in sowing seed to produce new populations of one threatened Podostemaceae species — a global first for this family — in nearby Sierra Leone,” Cheek reports. “This gives hope that if seed is collected correctly, so it remains viable in storage, it might save the species.”

That’s a big “if,” given the world’s current lack of conservation commitment and the short shrift given to endangered plants, which receive far less attention or funding than charismatic megafauna like tigers and elephants.

“Unless my team gets funding, and can then direct and organize seed collection, it just does not happen,” Cheek says. “Capacity and confidence are so low among our partners in so many countries in tropical Africa, sadly.”

They’re not alone. The experience of identifying, naming and then potentially losing so many plant species weighs heavily on Cheek.

“With the almost certain loss of this species,” he says, “my mentality is shifting to the view that while uncovering and publishing new species to science gives us a better chance of getting them protected, in practice it is more realistic to accept that we cannot always save species.” He acknowledges this sounds defeatist, but adds, “At least with our work, we are recording for posterity more of what is going extinct, which otherwise we would never know existed.”

Crimes of the powerful: Why the Mar-a-Lago "special master" decision is so dreadful

Teflon Don: How Trump keeps getting away with it all — even top secret nuclear documents

The Hans Niemann cheating mystery may be just what chess needed