The great queer thriller “They/Them” flips the script on horror films you start with its clever/devious opening scene involving a lone driver in the woods during the night. It is among the many indications that thrice Oscar-nominated writer John Logan (“Gladiator,” “Penny Dreadful“) creating a confident directorial debut is toying with viewers. Despite having a pointed mention of “Friday the 13th,” nothing in “They/Them” is fairly what it appears a lot of its characters have secrets which is what get this to crafty film so damn fun.

The story unfolds at Whistler Camp,” in which a band of LGBTQIA+ youth have already been delivered to be “straightened out.” Even though director, Owen Whistler (Kevin Bacon) tells campers it is a “safe space,” it really is, actually, quite dangerous. Not merely is Whistler a conversion therapy retreat, but a masked killer is stalking the lands.

“They/Them” creates a feeling of unease slowly. Upon arrival, the trans and non-binary Jordan (Theo Germaine), who uses they/them pronouns as in “They can not believe they’re as of this fking camp” requests an all-gender cabin once the campers are assigned to “boy” and “girl” bunks. Owen, suitably challenged, sees Jordan will likely be adversarial. A later scene where Cora (Carrie Preston), the camp’s therapist, gets inside Jordan’s head is among the film’s most insidious.

But this difficult moment is accompanied by among the film’s most energizing sequences. As Alexandra (Quei Tann) counsels a pensive Jordan, “Change the voices in your mind. Make them as if you instead,” the complete cabin breaks out singing and dancing to Pink‘s anthem, “Fkin’ Perfect.” They bond and rebel against change/being changed in this empowering moment.

This theme is well toned throughout “They/Them.” Because the campers are assigned to binary, heteronormative activities the people do athletics and go shooting, and girls make craft projects and pies the youth resist and defy. When Owen wants a guy with “killer instinct,” he asks the musical-theater loving Toby (Austin Crute) to shoot something. However, Toby struggles to take action, and his fellow campers including Stu (Cooper Koch), and Alexandra arrived at his support. Moreover, when Jordan is challenged by Zane (Boone Platt) the camp’s formerly gay now “straight because the day is long” athletic director to a target competition, Jordan proves to become a master marksperson. These episodes provide more character development than tension.

Likewise, Kim (Anna Lore), a lesbian camper, excels at baking, which encourages activities counselor Sarah (Hayley Griffith) ahead to her, that is downright creepy. Kim is comforted by the bisexual Veronica (Monique Kim), plus they engage in a separate moment on the dock.

The sex scene between Kim and Veronica offers more pleasure than peril. The characters that are punished (i.e., killed) for sex are ones who behave inappropriately and inauthentically as when one guy is considering selfies of Stu in a Speedo to be able to take part in intercourse with a lady camper.

Yet it really is whenever a character seduces a camper under false pretenses that “They/Them” targets the horrors of aversion therapy with the type receiving electric shocks to snuff out their same-sex desires. (Earlier Jordan discovers an accumulation of old photos featuring similarly traumatized victims.) The electroshock device is, needless to say, used to kill in a single scene, as though to emphasize the harm of such treatment.

It isn’t a spoiler to reveal that that murderer is someone acting contrary to the hateful practice of conversion therapy and justified in attempting to turn off every conversion therapy center, even though killing can be an extreme solution to make that happen lofty goal.

“They/Them” however, is relatively mild on the bloodletting, which can disappoint gore hounds, but sensitive viewers will undoubtedly be grateful save one scene involving an animal’s death. (It’s implied not shown.) Logan mostly keeps the suspense at a simmer. An early on scene involving a lady character being caught in the shower, provides more surprise than splatter. Generally, whenever a victim is dispatched, it really is quick and efficient, and increases the killer’s cause.

As Jordan, Theo Germaine delivers an extraordinary performance because they’re endearing and use their wits and skills to survive. At one point, Jordan wryly observes that things, “Don’t feel right. There must be more Bible-thumping and queer-bashing,” and takes charge as bodies accumulate. Likewise, whenever a character assigned with a hard task claims they’re a Black transgender woman, so that they haven’t any fear, it really is hard never to laugh and applaud.

“They/Them” is notable for casting authentically and having trans, non-binary, gay, lesbian and queer actors playing trans, non-binary, gay, lesbian and queer characters. (Similarly, the recent “Fire Island” and the forthcoming “Bros” have largely authentic queer casts.) It can elevate the film as the characters feel real, even though they play up stereotypes. Austin Crute could be sassy and flamboyant, but as Toby connects with Stu who’s initially homophobic their friendship feels sweet, not forced. As Stu, Cooper Koch is convincing as a hunky frat boy, which explains why as he drops his guard and becomes more self-accepting, he could be more sympathetic. Koch makes his transformation compelling. 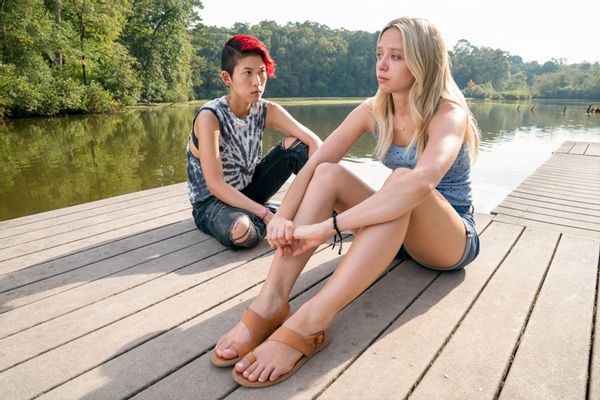 The film also gives Monique Kim some choice moments as Veronica. Her droll line deliveries like a comment she makes when Kim craves a dirty martini are amusing, in fact it is pleasing to see her relationship with Anna Lore’s Kim develop during the period of the film.

Logan also lets the straight actors dig to their parts. Kevin Bacon appears to relish his role because the camp’s director alternating between friendly and fiendish. Alas, Carrie Preston isn’t given enough to accomplish, but she actually is pitch-perfect in her therapy sessions. And, as Molly, the camp’s nurse, Anna Chlumsky is likeable as a reluctant ally for the youth.

“They/Them” is really a smart and savvy film that demonstrates the worthiness of putting queer heroes in the horror genre and also the damaging ramifications of conversion therapy rather than allowing visitors to be who they’re.

“They/Them” is currently streaming on Peacock. Watch a trailer via YouTube.