The actress, who’s most widely known for playing Arya Stark in the hit fantasy show, took to Instagram to reveal the buzz cut from her holiday resort in Seychelles, captioning the post: “washing head w facewash> #3in1girlie”.

Fans flooded the comments making use of their compliments for the brand new look, including Williams’ Pistol co-star Emma Appleton, who wrote: “WOWWWW”.

Pistol premiered on Disney+ in-may and follows the Sex Pistols’ rise to fame in the ’70s. Williams starred as fashion icon Jordan, aka Pamela Rooke, while Appleton played Sid Vivacious’ girlfriend at that time, Nancy Spungen.

Talking about dealing with the role and dealing with the true Pamela Rooke on the series, Williams told Digital Spy: “I had lots of preconceived ideas of what this story would be, and just how that it had been going to find out, just from other activities which have been made from this time around.

“But because we’d the support of a lot of people who have been really thereincluding Jordan, who was simply an immense help me and every area of the productionit meant that people could take it back to a location that has been more real and we’d a face to all or any of the iconic names.” 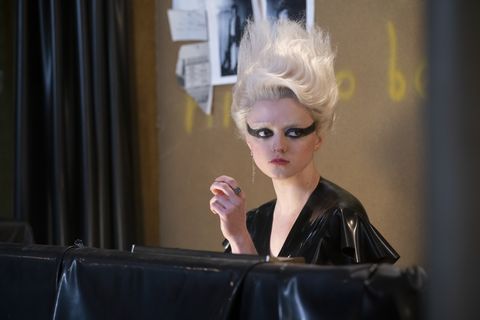 Up next for Williams is Apple TV+ series THE BRAND NEW Look, that may follow the iconic rise of designer Christian Dior as he dethrones the Grande Dame Coco Chanel and helps return spirit and life to the planet along with his iconic imprint of beauty and influence.

An initial look at the upcoming thriller, that will likewise incorporate the stories of other Dior associates and rivals, was revealed back May.