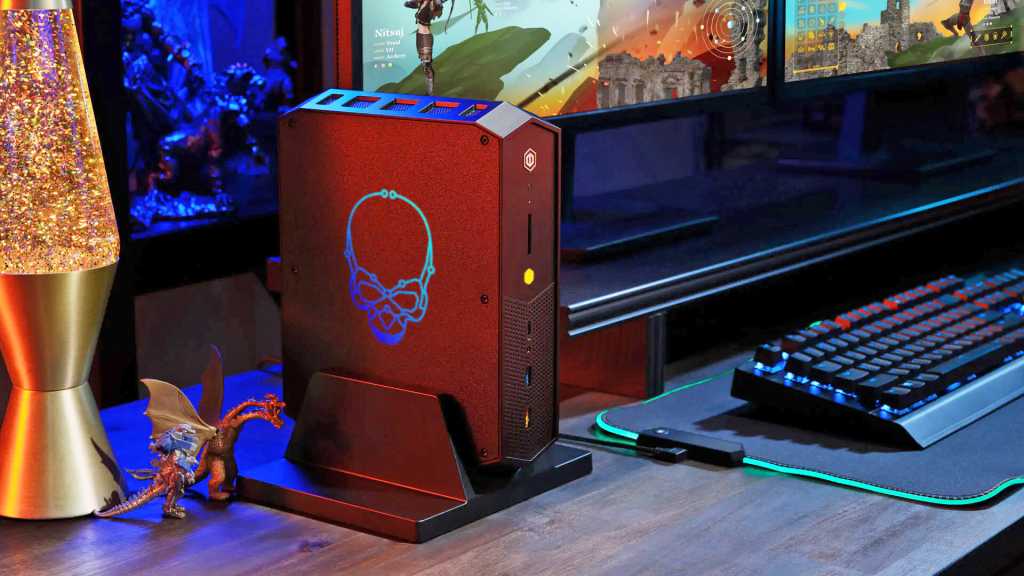 Intel is taking its dear, sweet time getting its first-gen Arc desktop graphics cards to market. But while we wait, the company is at least doing a few things with its discrete Arc laptop GPUs. They’re now popping up in the company’s popular NUC mini-PCs, integrated alongside the latest 12th-gen Alder Lake CPUs. The new “Serpent Canyon” gaming NUC systems feature an upgrade to the Arc A770M graphics card, giving it some serious oomph over previous Intel Iris GPU-based NUCs.

The new NUC12SNKi7 Full is built around Intel’s Core i7-12700H high-end laptop CPU, with 14 total cores and a maximum clock of 4.7GHz. (The NUC series uses laptop-style CPUs and motherboards — it’s what makes them a fraction of the volume of standard desktops.) The base model comes with the Arc A770M GPU built in, the first time Intel has been able to include its own in-house discrete GPU in the enthusiast series. Previously NUC designs had to either stick with integrated graphics, go with AMD hardware, or come in a much larger size that accommodated desktop-style PCIe expansion slots for full-sized graphics cards.

The Arc A770M features 32 Xe HPG cores running at 1650MHz and a generous 16GB of GDDR6 memory. Its early benchmarks put it in the range of mobile GPUs like the Nvidia RTX 2070 Super Max-Q or Radeon RX 6600M, though Intel’s relatively immature graphics drivers are likely to make in-game performance a little less than that would imply. Once again, note the comparison to laptop specs. While the all-in-one NUC systems can be upgraded with RAM and M.2 storage, they lack CPU or GPU upgrade options, and can’t compete directly with full-sized desktops in the same price category.

And yeah, this one’s pretty pricey. The $1700 base model comes with that CPU and GPU combo, but has just 8GB of DDR4 memory and 256GB of M.2 SSD storage. That can be expanded to 64GB and 4TB, respectively, with an extra two M.2 slots wide open for even more storage, but you’d be better off shopping for the parts yourself than buying them from Intel’s sales partner SimplyNUC. The base model doesn’t even come with an operating system, though they’ll throw Ubuntu on there for free (and you do get Call of Duty 2022, Ghostbusters, and Gotham Knights).

Other standard features include dual DisplayPort and single HDMI 2.1 ports, six USB 3.2 Gen 2 ports (four rear, two front), 2.5Gb Ethernet, integrated Wi-Fi 6E and Bluetooth 5.2, an integrated microphone supporting Amazon Alexa, USB-C/Thunderbolt 4 ports on the front and rear, and a handy SDXC card slot. The gamer-approved LED skull pattern on the housing can be adjusted by the user. It all fits in a package just 2.5 liters in volume — about the size of a super-fancy gaming router — drawing a respectable 330 watts of power.

The NUC12SNKi7 is currently up for pre-order. A release date has not been set.

Michael is a former graphic designer who’s been building and tweaking desktop computers for longer than he cares to admit. His interests include folk music, football, science fiction, and salsa verde, in no particular order.