The early results are in: The return to work is working.

Office occupancy hit a pandemic high over the last week according to data tracked by Kastle Systems, a security company, with 10 of the country’s top metropolitan areas seeing an average of 47.5 percent of workers swiping into offices compared with pre-pandemic levels.

That’s up more than nearly 4 percent from the week before Labor Day, when bosses drew the latest line with the push to return to offices. At the same time last year, the national average was less than 31 percent.

Wednesday of last week was the busiest yet across the country, with the national average creeping up to 54.5 percent of pre-pandemic levels, the highest since early 2020 according to Kastle.

Even so, office occupancy in the United States remains below half of what it was in 2019, according to Kastle’s data, with a growing divergence between office attendance on the coasts and elsewhere.

Texas cities such as Austin, Dallas and Houston have been seeing occupancy levels around 55 percent compared with pre-pandemic levels in recent weeks. Philadelphia and San Francisco’s averages, meanwhile, just hit 40 percent last week. Washington, New York and Los Angeles are around 45 percent, as is Chicago.

Texas was one of the first states to shift toward “living with the virus rather than hiding from it,” said Kris Larson, president and chief executive of Central Houston. “Culturally there’s just a desire to get back to work,” Larson said.

But for the five months leading up to Labor Day, office occupancy in Houston had reached a “glass ceiling,” according to Larson. Since the holiday, the city has seen “a really big push to get folks back in the office,” Larson said.

“We are seeing some incremental increase in expectation for folks to get back in the workplace more often throughout the workweek,” Larson said.

Kastle’s chairman, Mark Ein, said he expects occupancy to keep moving higher in the coming months. The risks surrounding the coronavirus and the labor shortage made it hard for employers to enforce office mandates, even with vaccines available and deaths declining. But as the economic outlook darkened and people decided that they’re “going to live with covid,” those barriers have broken down, Ein said.

Public transit ridership has been climbing in the District, and in New York City, where banks Goldman Sachs and JPMorgan were among the first companies to bring workers back to offices.

“We had four false starts on bringing people back to the office,” said Kathy Wylde, chief executive of the Partnership for New York City, a group representing hundreds of major employers. “This feels like we’re finally putting the pandemic behind us.”

Downtown businesses are seeing the return of the work lunch, Wylde said. The sidewalks are crowded with workers, although the international tourists have yet to return in full force.

“We are hearing more and more that employees are recognizing that their career advancement depends on relationships and getting back to the office,” Wylde said. “We think that will continue to advance.”

But after big companies such as Apple, Peloton, NBC and Comcast pushed to bring workers back to offices after Labor Day, some employees fought to hang onto the flexibility they found in the pandemic. Nearly 1,500 current and former Apple employees signed a letter asking the company to “stop trying to control how often you can see us in the office.”

Apple did not immediately respond to a request for comment.

Others are confronting logistical barriers. At Tesla, whose chief executive Elon Musk asked employees to come back 40 hours a week in the spring, offices are not equipped to handle the influx of workers, according to CNBC. A shortage of desks, chairs, parking spots and other resources hampered efforts to bring employees in the San Francisco Bay back three days a week, CNBC reported. The company set staggered in-office schedules with employees coming two days a week instead.

Tesla did not respond to a request from The Washington Post.

Having less access to work resources and feeling less connected to company culture ranked among the top disadvantages of hybrid work, according to a recent Gallup poll of more than 8,000 remote-capable workers. So did decreased collaboration and impaired relationships with co-workers.

In its return to office, software giant SAP has emphasized shared space in cities such as Montreal and revamped other sites such as its office in the San Francisco Bay to focus more on innovation. It’s hosted ice cream socials, philanthropy team-building events and “Work from Work Wednesdays.”

“We’ve gotten creative because there’s only so many virtual happy hours you can take,” said Lloyd Adams, president of SAP North America.

The long term verdict on offices remains up in the air, and it’s going to take awhile to work itself out, according to Jeff Adler, vice president of the data division of Yardi, a property management software company that works with offices around the globe. The return-to-work calculus has been constantly changing for each industry, each company, Adler said, and needs are still evolving.

“Nothing happens quickly in office, nothing is happening quickly,” Adler said. “We’re in the messy, mushy middle.”

Yardi’s clients are seeing leases, which usually run in increments of more than five years, get shorter. Retention and renewal rates are down compared to before the pandemic, Adler said, and there’s greater interest in co-working spaces.

Still, “The best marquee buildings are leasing very nicely, very quickly,” Adler said. “Because if you’re going to have a place, you might as well have a good one, right?” 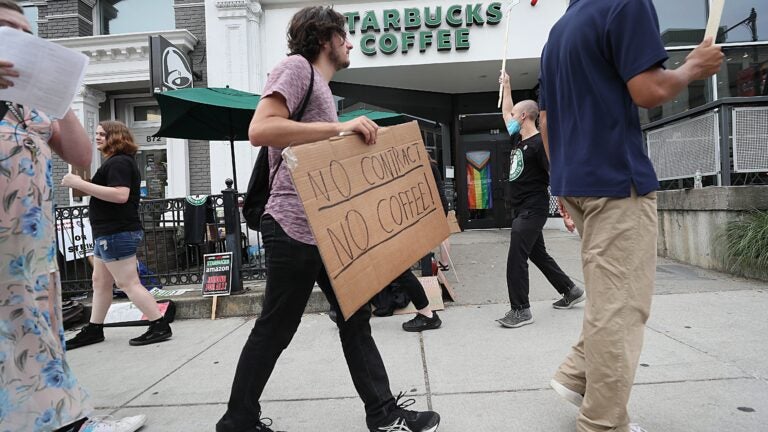