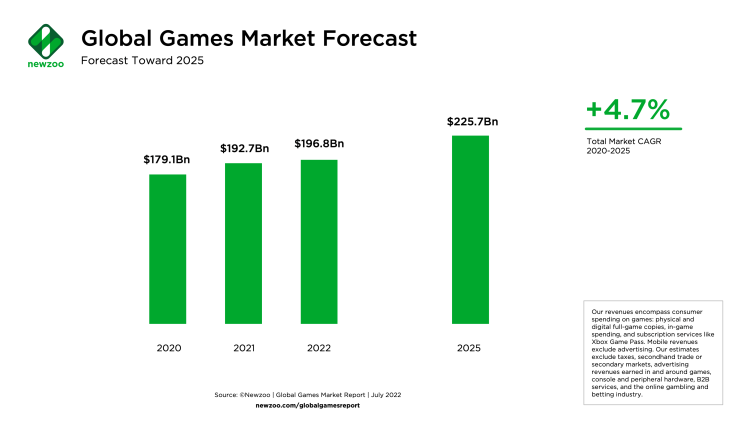 Interested in learning what’s next for the gaming industry? Join gaming executives to discuss emerging parts of the industry this October at GamesBeat Summit Next. Register today.

Newzoo released a modified Global Games Market report today with a slightly less optimistic prediction of the industry’s 2022 revenues. However, the report overall praises the industry, even going so far as to call it (to some extent) “recession-proof.”

The previous version of the report, which released in early May, predicted that the market would break $200 billion in revenues for the first time. However, Newzoo says it has modified the numbers in response to factors such as supply constraints and game delays. That said, the report claims that player engagement will remain high.

However, the modified report puts projected revenues at $196.8 billion. This will still represent a 2.1% year-on-year growth. The report also says that the range of monetization options mean that, “there are pathways to play no matter how much disposable income a player has.”

The supply problems and delays will have an effect on the console and PC markets. PC revenues will remain flat ($40.4 billion, 1.6% growth) and console revenues will decline ($52.9 billion, -2.2% decline). But the report predicts that the slight decline of this year is a temporary thing and that it will reach $225.7 billion by 2025.

Newzoo says that, “Triple-A gaming is no longer as hit-driven and seasonal as it once was.” Players engage heavily with live service games such as Fortnite and League of Legends. The number of global players will also reach 3.2 billion in 2022, it predicts. Latin America, Africa and the Middle East will drive much of the growth.

Overall, the report expresses confidence that the games industry is still doing well, even accounting for stabilization following the 2020 boom. The mobile market will drive most of the growth, with a predicted 5.1% in growth and $103.5 billion in revenue.

GamesBeat’s creed when covering the game industry is “where passion meets business.” What does this mean? We want to tell you how the news matters to you — not just as a decision-maker at a game studio, but also as a fan of games. Whether you read our articles, listen to our podcasts, or watch our videos, GamesBeat will help you learn about the industry and enjoy engaging with it. Learn more about membership.

Digiday+ Research: Beyond the hype, how publishers are actually using AR and VR