The US Supreme Court delivered a temporary victory for a Jewish university under assault by the alphabet people.

Yeshiva University in Manhattan is the oldest Jewish university in America. Like Catholic and other religious-based universities, It accepts students from all denominations and awards degrees in a variety of disciplines.

As former RedState Erick Ericksson is fond of saying, “you will be made to care.” In 2020, a small number of Yeshiva students and alumni banded together to pummel the leadership of Yeshiva University into submission. They demanded that it approve as a “Pride Alliance” club. This would allow the club to use university facilities for recruitment and meetings. When Yeshiva refused to go along with sanctioning a club dedicated to the antithesis of Judaism (and Christianity), they sued. The cause of action used by the LGBTQIA2S+ plaintiffs was that New York’s “public accommodations” law required Yeshiva to accommodate whatever bizarre sexual practices the “club” came up with. Shockingly, the alphabet people won.

Yeshiva lost at the lower court level when a trial judge focused on whether the University qualified as a religious corporation within the meaning of the New York City Human Rights Law, a public accommodation regulation that bars discrimination based on sexual orientation. The law expressly excludes certain religious corporations and Yeshiva argued that it fell under the exception.

The court noted, however, that according to an amendment to the school’s charter that was adopted in 1967, the university is considered an “educational corporation.”

“Yeshiva’s organizing documents do not expressly indicate that Yeshiva has a religious purpose,” Judge Lynn R. Kotler said in holding that Yeshiva is not exempt from the law.

The court also rejected the school’s claims that the NYCHRL violates Yeshiva’s First Amendment Rights holding that the public accommodations law is a neutral law with general applicability to all parties.

“It does not target religious practice, its intent is to deter discrimination, only, and it applies equally to all places of public accommodation other than those expressly exempted as distinctly private or a religious corporation organized under the education or religious law,” Kotler wrote.

The judge said that the challengers sought “equal access” and that the school “need not make a statement endorsing a particular viewpoint.” Kotler also noted that some of Yeshiva’s graduate schools allow LGBTQ groups, undercutting the university’s arguments.

Yeshiva is represented by the Becket Fund for Religious Liberty, which has a damned strong track record on religious freedom cases. A short while ago, the US Supreme Court imposed a stay on the trial court order. 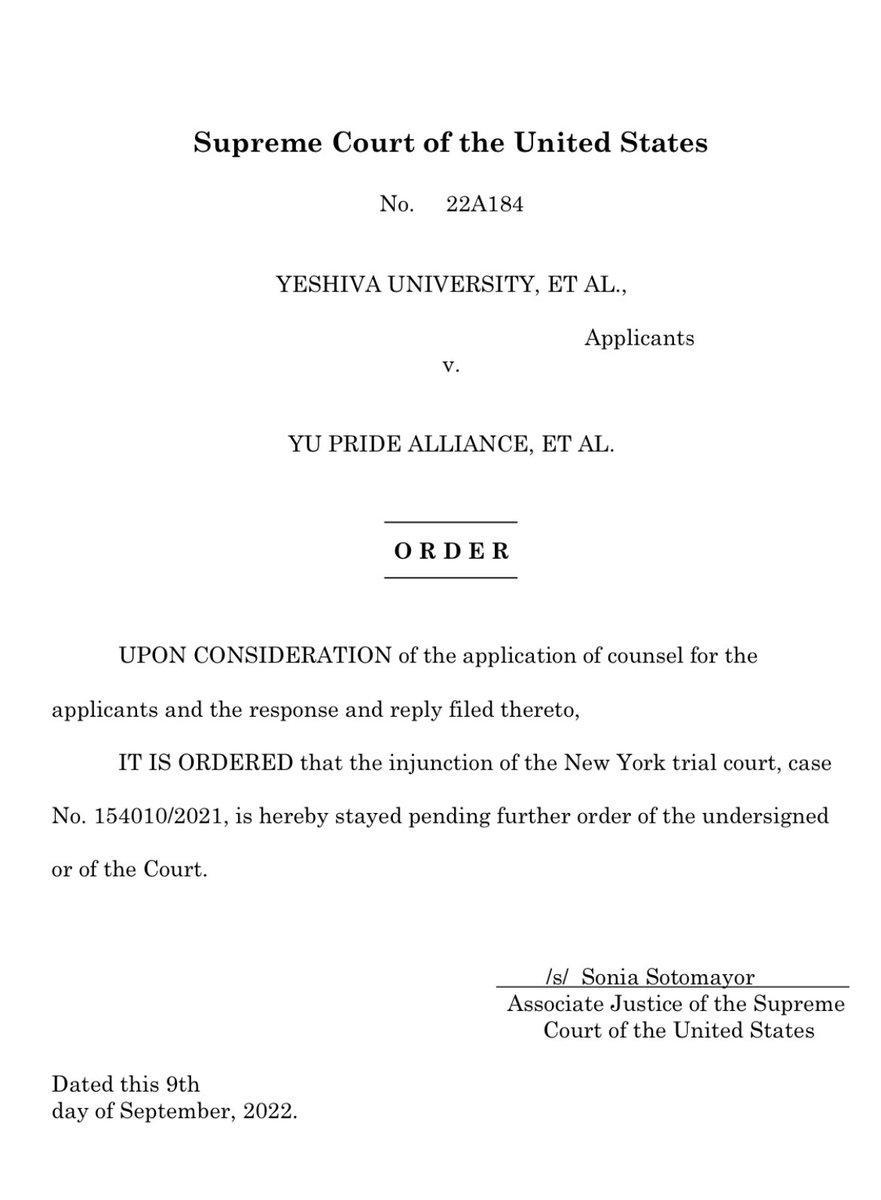 Justice Sonia Sotomayor on Friday afternoon granted, at least for now, a request by Yeshiva University to block a New York state court ruling that directed the university to approve an official “Pride Alliance” student club. The university, which has four campuses in New York City, had argued that complying with the state court’s ruling would violate its religious beliefs.

After the New York appeals courts declined to put the trial court’s ruling on hold, Yeshiva came to the Supreme Court, calling the ruling an “unprecedented intrusion into church autonomy.” The Supreme Court has long held, the university contended, that religious organizations have broad discretion to structure themselves “as they see fit ‘to assist in the expression and dissemination of any religious doctrine.’” Noting that the window for clubs to apply for recognition closes on Sept. 12, the university asked the justices to act quickly.

In her brief order on Friday afternoon, Sotomayor did not explain her decision to temporarily put the state trial court’s ruling on hold. However, the final sentence of her order, indicating that there could be further action on the university’s request, suggests that the court may have wanted to act at least preliminarily before the Sept. 12 deadline for clubs to apply for recognition.

To be charitable, the trial judge’s ruling was agenda-driven and flew in the face of commonsense and the First Amendment. It also stands in stark opposition to recent Supreme Court rulings of religious liberty in regard to education. Why she thought her ruling would stand is unfathomable unless the agenda was to create an opening in which the alphabet club could register and then make Yeshiva the bad guy when the Supreme Court got around to hearing the case, that is assuming the New York State appellate courts ever heard it.

It is a safe bet that Yeshiva will emerge victorious unless Joe Biden gets two more Supreme Court nominees by the time this case percolates its way up.