The intriguing drama, “The Immaculate Room,” written and directed by Mukunda Michael Dewil (“Vehicle 19“) is certainly a film for the pandemic era. The high-concept plot has Michael (Emile Hirsch) and Catherine (Kate Bosworth) secluded in an almost all-white space for 50 days to win $5 million. However, if either of them leaves the room, the prize money drops to $1 million. Also, while they can bring nothing inside, they can purchase up to two “treats” each for some of the prize money. (Food in the form of a liquid in a milk carton that “smells like nothing,” is dispensed through a device in the wall along with some of the treats.)

The characters spend much of their time inside the immaculate room playing a waiting game, and watching the film is a bit of a waiting game as well. Sure, it opens with Michael full of energy and big ideas about how he will spend his share of the cash. (One involves hanging with Elon Musk.) Hirsch gives a kinetic performance, shaking with restless excitement in the opening moments, and later running around the room in an effort to keep busy and fit. He even draws all over the white walls with the green crayon he gets as his first “treat” to stave off boredom. Hirsch’s eyes are often wide and dart around quickly; he is very expressive, even if it becomes clear that his mind is almost as blank as the room. He repeats the words on his shirt tag in different accents at one point, which amuses.

Michael is the hare to Catherine’s tortoise. She is the more practical character, in part because she has never had money and has her eyes on the prize — not the countdown clock that Michael stares at and insists one second feels like three. Catherine gives herself daily affirmations in the bathroom mirror, meditates, and goes to sleep at 10 and gets up at 7. Her path is sticking to a routine, and that includes no sex with Michael — because, she considers, people may be watching.

Thankfully, “The Immaculate Room” is not a reality TV show or a webseries, so the overlay of people watching these people is restricted just to the film’s audience. The couple wonders why the man sponsoring the contest would do it, and they consider the human condition, and how people are changed by such stunts. (One could liken this “game” to a Hands on a Hardbody contest.) Likewise, viewers are asked to contemplate the premise, which seems designed to test the morale of the couple. How or would you survive this situation — and is it worth the prize money?

Michael and Catherine are not married, as Catherine indicates with some dismay early on. It is expected that the characters will get on each other’s nerves and fight and perhaps even break up the longer they are isolated together. And that happens shortly after the anticipated montage of days passing that takes place about 20 minutes into the film. The first fight involves a bug that has somehow entered the room — so much for it being immaculate — and Michael wants to release it while Catherine thinks that if the door opens for any reason, they will forfeiting at least $4 million.

How the bug got inside is not addressed, but another object, a gun, appears in the bathroom suddenly one morning. Suffice it to say, that gun will go off before the credits roll. 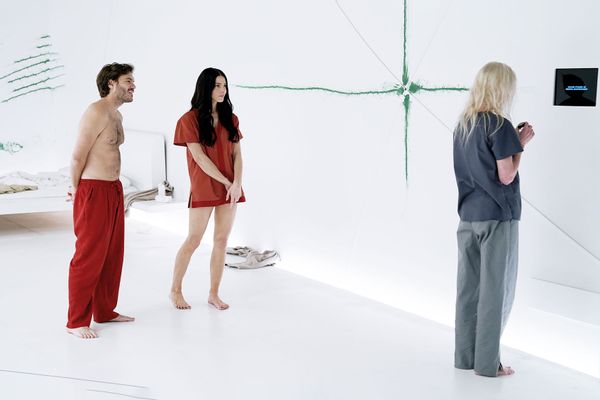 “The Immaculate Room” kind of boxes itself into a corner during its middle act, but the film picks up when it brings in a third character, Simone (Ashley Greene Khoury) who is Michael’s second “treat.” She shows up naked — one might say immaculate — and her time in the room is undetermined. Simone alters the dynamic between Catherine and Michael, creating jealousy between the couple as they get closer to earning that prize money. (Feel free to read Adam and Eve and original sin metaphors here.)

Want a daily wrap-up of all the news and commentary Salon has to offer? Subscribe to our morning newsletter, Crash Course.

The addition of outside people helps the film a bit because it gives Hirsch and Bosworth something to engage with. When Catherine receives a video message from her estranged father (M. Emmet Walsh), she goes into a bit of a meltdown. It prompts her to buy a treat, and she gets ecstasy(!) which she shares with Michael and Simone. Suddenly there are colors and the camera spins upside-down, as the characters hug and kiss and dance and crash. Michael has a bad trip which brings up a trauma from his past. There is talk of love and pain and fear and more fighting. It is largely compelling because of the performances, but it also helps that these episodes play up the use of space and feature some nifty camerawork. A bit more style earlier in the film might have helped stave off the deliberately bland feel that dehumanizes the characters. (It is a safe bet that the director has seen “THX 1138.”)

“The Immaculate Room” ends with a frustrating lack of ambiguity. Given all that transpires leading up to the will-they-or-won’t-they-make-it climax — and the film is just one suggestion of how things could possibly play out — Dewil feels he needs to explain what happened. That really should be a choice the viewers get to make.

Nevertheless, this film offers some interesting food for thought for folks who are game.

“The Immaculate Room” is available in theaters and on demand on Friday, Aug. 19.

Dr. Oz should be worried – voters punish "carpetbaggers," and new research shows why

Steps to make an Affogato
29 mins ago