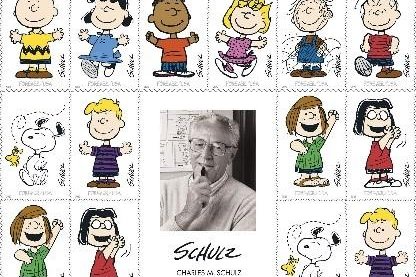 The USPS will issue a pane of 20 stamps with Charlie Brown, Lucy, Franklin, Sally, Pigpen, Linus, Snoopy and Woodstock, Schroeder, Peppermint Patty and Marcie within an event on Sept. 30 at the Charles M. Schulz Museum & Research Center in Santa Rosa, Calif.

“The centennial of the birth of cartoonist Charles M. Schulz brings new stamps celebrating his wit and wisdom through his unforgettable Peanuts characters,” the USPS said in a statement. “The groundbreaking comic became history’s hottest and successful strip.”

The first-day-of-issue event for the stamps will undoubtedly be free and available to the general public with attendees encouraged to RSVP on the USPS website.

The Peanuts comic strip debuted in 1950 and garnered vast sums of readers worldwide and in the 1960s spawned television specials, books and a Broadway show.

Schulz drew, inked and lettered all the nearly 18,000 Peanuts comic strips, with the final one published your day he died, earning various awards that included a posthumous Congressional Gold Medal.